While President Trump’s approval numbers sink and his disapproval numbers rise, Republicans in Congress have to be worried about Trump becoming an albatross around their neck that will hurt them in the 2018 midterm election and beyond.

Trump appears to be failing to fully make the transition from being a reality television star to being president.

During the campaign, Trump said he would stop Tweeting once he was in office and he would become “so presidential”.

On March 4 2017, Trump, via Twitter, accused former President Obama of wiretapping him, calling him “bad (or sick) guy”, showing once again Trump’s proclivity to believe in and spread conspiracies.

Then, through his press secretary Sean Spicer, he raised the possibility that British intelligence helped Obama “tapp” him.

Since Trump’s Saturday morning tweets, multiple congressmen, including enthusiastic supporters of Trump like Devin Nunes, have stated emphatically there is no evidence of Obama wiretapping Trump, either with or without help from British intelligence.

While Trump’s conspiracy-mongering will likely have little effect with his rock-solid base, Trump’s suggestion that the British were somehow involved with former President Obama in wiretapping him has created an international incident with one of America’s staunchest and most important allies.

While Bill Clinton was in office, his surrogate Betsy Wright coined the phrase, ‘Bimbo Eruption’, to describe when women would go public with accounts of Clinton groping and/or sexually assaulting them.

Similarly, Trump’s tweets are keeping White House staff fully occupied cleaning up after their boss’ intemperate and ill-advised remarks, offering explanations for what Trump meant and the like.

During the campaign, Trump said “I could stand in the middle of Fifth Avenue and shoot somebody, and I wouldn’t lose any voters, Okay?”

Trump may be right, but campaigning/throwing red meat to your base is entirely different from responsibly governing, advancing a legislative agenda, and leading the free world in increasingly perilous times.

Hopefully these latest dismal approval/disapproval numbers will be the equivalent of Republicans getting hit upside the head with a half-frozen tuna, because if Trump doesn’t stop tweeting and spreading conspiracies, the Republicans – and their agenda and electoral prospects – could be heading in the same direction as Trump’s approval numbers.

Maddow Clowns to the Left of Me, Trump Jokers to the Right, Here I Am

In the midst of vertigo-inducing spin by those on the left and right, the matters of President Trump’s unsubstantiated claim that former President Obama was somehow involved in wiretapping at Trump Tower and Trump’s ties to Russia continues to be investigated.

In the meantime, the House intelligence Committee, chaired by Devin Nunes (R), and Adam Schiff (D) as ranking member, requested the Trump White House to provide evidence of Trump’s explosive wiretapping charge by last Monday March 13, 2017, but got no response from Trump. Shocker, I know.

Now, a week and a half after Trump tweeted his wiretapping allegation, Nunes, a Trump supporter, said today (Wednesday March 15, 2017): “We don’t have any evidence that took place . . . I don’t think there was an actual tap of Trump Tower.” Knock me over with a feather.

We live in crazy political times.

On the left, there’s the snarky Rachel Maddow at MSNBC, claiming last night to be in possession of Trump’s tax returns, which, if true, would certainly have been big news; the only problem was that what Maddow actually had was alleged to be two pages of Trump’s 2005 tax return that showed his tax rate was around 25%. This left many on the left, hoping for something big with which to whack Trump, or even a coup de grace, disappointed and criticizing Maddow for pulling a stunt seemingly designed more for a bump in ratings, along with actually helping Trump’s case that there’s no ‘there’ there, re, his tax returns. Insert sad trombone sound here.

On the right, Trump surrogates continue with their narratives/talking points that the American people simply don’t care about Trump’s tax returns/Russia ties, and that what they do care about are jobs and the economy; the only thing Trump surrogates didn’t say was that it’s time to ‘move on’, the phrase made famous by Bill Clinton’s surrogates when they tried to change the subject from Clinton’s disgraceful episode with a young intern named Monica Lewinsky (for those who may not be familiar with the story: 49-year-old President Clinton received oral sex from 22-year-old Lewinski in the Oval Office, resulting in a semen stain on Lewinski’s dress.) Sorry about that.

On the left, we have the folks who have lost their mind and continue to overplay their hand re, attacks on Trump, complete with comparisons to Hitler or even ‘ol Scratch himself (a.k.a., El Diablo, a.k.a., Satan).

On the Right, we have the Ever Trumpers doing their imitation of police Lieutenant Frank Drebin in the movie, ‘The Naked Gun’, where he stands between the gathering crowd of onlookers gawking at a fireworks factory exploding like a grand finale and telling the crowd, ‘Alright, move on, nothing to see here. . .’.

Clowns to the left of me, jokers to the right, here I am.

Trump’s Speech to Congress was Better Than Expected, But He Didn’t Address Systemic Problems like the Federal Debt:

I was pleasantly surprised by President Trump’s speech to Congress on February 28th, 2017. If I were to give it a letter grade, I’d give it a solid ‘B’.

Mostly because he stayed on-teleprompter and I could tell that whoever had sway in the content of Trump’s speech tried to be more aspirational and ‘presidential’ in tone.

Judging by this standard (and lower expectations), Trump’s speech was a success.

But make no mistake: Trump is still Trump, and one good speech isn’t enough to tell if this was more a one-off good performance or whether Trump has had something like a political Damascus Road conversion that months and years from now we’ll all be saying, ‘Trump’s first speech to Congress was the turning point’. . .

And while the moment where the widow of the fallen Navy SEAL received an extended (and very well-deserved) standing ovation was wonderful and genuinely powerful and moving, Trump’s policy prescriptions still leave much to be desired.

Political commentator Amanda Carpenter was right in pointing out the “Populism” of Donald Trump is very much like the “Compassionate Conservatism” of George W. Bush’s presidency, in terms of both being fiscally irresponsible.

And political commentator Ben Domenech’s point that if you’re a fiscal conservative, Trump’s speech leaving you feeling uneasy (to say the least) hits the bulls-eye.

When Barack Obama was campaigning for election in 2008, he said it was “unpatriotic” that the federal debt increased $4 trillion while George W. Bush was president.

But while Obama was president, the federal debt skyrocketed another $10 trillion dollars (does this mean Obama is 2.5 times more “unpatriotic” than Bush?)

The current federal debt is about $20 trillion dollars.

This is madness on stilts on roller-skates, and it’s unsustainable.

We’re mortgaging the future flourishing of Millennials and subsequent generations of Americans so this generation can feel good now.

Republicans and the Republican Party (at least some of its members) used to be known as the people and party of fiscal discipline.

But in the age of Trump – in the glow of victory and wielding power in Washington D.C. and ‘Make America Great Again’- will Republicans now become party to committing profligacy?

Is this how shallow and blinkered Republicans have become in so-called Trumpian ‘victory’?

Have Republicans and the Republican Party become the political equivalent of Belshazzar’s Feast, living high on the hog and sneering at reality until the handwriting appears on the wall when it’s too late?

Boy, I sure hope not, but the current signs are not encouraging. 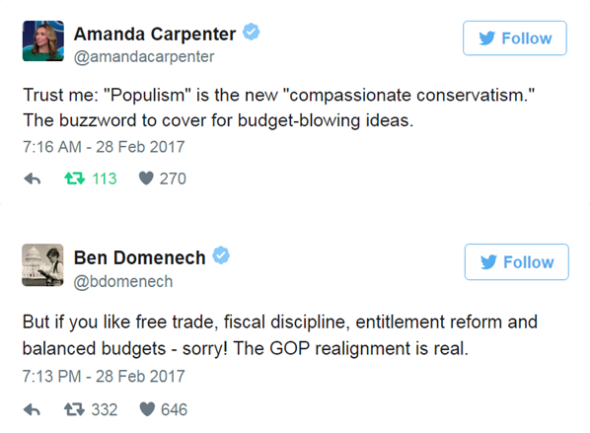