← Trump Fans Love to Say of Trump, “…but he FIGHTS!”, but When is Trump Going to Fight Against Russia’s Cyber-Warfare Against Us?
Sean Hannity Has Gotten Rich Telling People What They Want to Hear →

Andrew C. McCarthy is the brilliant prosecutor and expert on Radical Islam who put Omar Abdel-Rahman (“The Blind Sheikh”) in prison for the rest of his life for the 1993 World Trade Center bombing.

If true, this latest report adds to McCarthy’s existing concern that Donald Trump is compromised and is at risk of being blackmailed, manipulated, or worse.

Last November, intelligence reporter Howard Blum reported that American intelligence personnel met with their Israeli counterparts and warned them that Russian strongman Vladimir Putin has “leverages of pressure” over Trump. 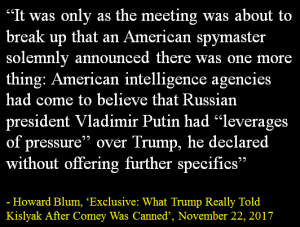 Blum reported the American intelligence personnel warned their Israeli counterparts to be careful what secrets they share because they feared Trump would compromise them.

I join Andrew C. McCarthy in being concerned that President Trump has opened himself up to blackmail, so it’s eminently reasonable to ask:

is President Trump himself a national security risk?