The Monumental Mendacity of a Narcissistic Politician 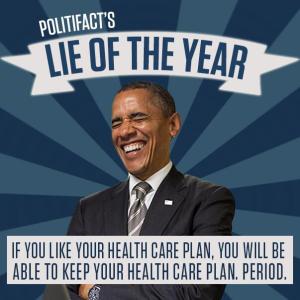 Obama didn’t lie just once about ObamaCare to get out of a tight spot during an interview or debate; he knowingly and repeatedly lied at numerous campaign events and speeches.

Americans know their politicians aren’t angels (not even close), but the enormity of Obama’s lies – not just with ObamaCare, but also the numerous scandals that have tainted his presidency along with his many foreign policy disasters – are profoundly unsettling.
Last January during an interview, Obama referred to the bloodthirsty Islamist group know as ISIS as “JayVee”, adding that “If a JayVee team puts on Lakers uniforms that doesn’t make them Kobe Bryant.”
Now ISIS, in an orgy of beheadings and mass murder, has taken over large areas of land in eastern Syria and northern Iraq, butchering tens of thousands of men, women, and children, establishing an Islamic Caliphate in territory American soldiers fought, bled, and died for.
The rise of ISIS in Syria and Iraq was made possible by the power vacuum created by Obama’s historic strategic blunder of pulling out U.S. troops from Iraq in 2011 so he could campaign in 2012 that he “ended the war” in Iraq.
Then in a remarkable display of chutzpah, Obama tried to evade responsibility for the rise of ISIS in Iraq by using the bogus argument that the Iraqis would not agree to keep U.S. troops in Iraq under what’s known as a Status Of Forces Agreement (SOFA), which former cabinet officials like Leon Panetta have repudiated.
Obama’s attempt at ducking responsibility is, of course, ridiculous, because Obama used his decision to pull out troops from Iraq in 2011 as a punchline in numerous political events during his 2012 reelection campaign.
Obama promised to “fundamentally transform the United States of America.” His mendacity and disastrous foreign policy have indeed had a transformative effect on America and the world.
The only problem is that the world Obama has created is one where war is now more likely; it’s a world where there’s a greater probability that Americans will need to answer the call to fight and die because an ideologically blinkered narcissistic politician wanted to deliver an applause line in his campaign speeches.